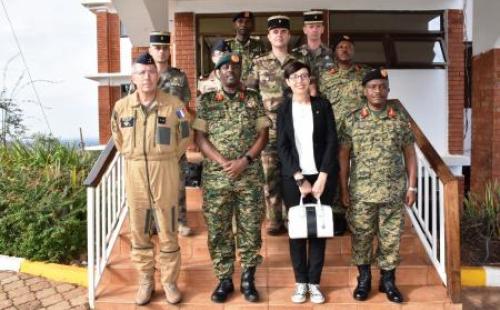 The French Commander of the French troops based in Djibouti Brig General Eric Gernez has lauded the closer cooperation between the UPDF and the government of Uganda in general. He said this while meeting the Chief of Defence Forces (CDF) General David Muhoozi at the Ministry of Defence headquarters at Mbuya hill. Gen Eric who is newly deployed at the French base in Djibouti was on a familiarization tour of the region. He came to Uganda because of the already military to military cooperation the French Army has with Uganda.

He pledged French Army readiness to take the cooperation a notch higher by increasing its presence in areas of training and other capability development of the UPDF. He highlighted some of the developments as training in Mountain warfare which was conducted in the Rwenzori Mountains and invitations of senior UPDF leaders to joint military exercises in Djibout. Eric appreciated Uganda’s vast experience on the continent and promised the readiness of the French Army to learn from it. “Working with us gives chance to share from your vast experience on the continent as we share ours with you too. We are impressed with the progress of the UPDF professionalism”. Brig Gen Eric said.

The CDF Gen David Muhoozi extended his thanks to the French government and the French military in particular for training UPDF in mountain operations and mountain capabilities that will make it easy for UPDF to deal with the volatile ranges of mountain Ruwenzori. “ As ADF spreads its wings across Eastern Congo even attacking UN forces there, we need more and more capabilities to monitor and deter them from using our mountain ranges by deploying specialized forces, I thank you for providing us with that capability”.

Gen Muhoozi added. The CDF also thanked the French government under European Union for supporting the troops in Somalia and requested that the same support should be extended to the Somali National Army to enable them take up security challenges of Somalia when finally AMISOM leaves. Gen Muhoozi applauded the French Government for supporting Uganda in its development programmes and supporting mechanisms that ensure peace and security on the African continent. “We still need capacity to respond to any mischief from any rebel groups operating in our mountainous areas and this training in mountain warfare by the French Forces is timely" he noted. Gen Muhoozi said that the Albertine Region needs serious protection for the young oil industry to thrive. He thanked the delegation for the partnership with UPDF and promised all the cooperation needed.

French troop have been training UPDF soldiers deploying in Somalia under AMISOM at Singo Peace Support training Centre in Nakaseke district since the inception of the Somalia mission. Gen Eric was accompanied by the French ambassador to Uganda Her Excellence Rivoal Stephen. In her remarks, she commended Uganda for being a regional hub of peace and stability. She briefed the meeting on the partnership and military experience with Uganda and hailed the UPDF on its successful mission in Somalia and said the French government will continue sharing experiences. The ambassador also revealed that Uganda stands out in the history of France for having the biggest number of soldiers trained by the French Army.