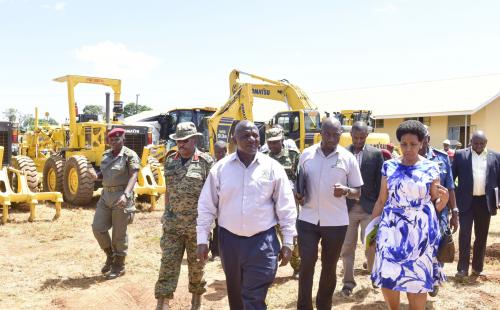 The Minister of State for Works, Gen. Katumba Wamala, has likened Uganda's geographical location and her economic strategic development as 'a roundabout' in the region, calling for the construction of viable roads network interlinked to all neighbouring countries, to boost it's economic growth.

"Uganda is like a roundabout in terms of trade in this region. It has to be accessible by distance by building excellent and viable roads to all borderlines," Gen. Katumba said.
Gen. Katumba Wamala was yesterday speaking at Sera Kasenyi Military Training School in Wakiso District during the closing  ceremony of a one-month long training course of 120 trainees of the Uganda People Defence Forces (UPDF) Engineers from the National Enterprise Corporation (NEC) on road construction as well as using and maintenance of equipment.
The assorted road equipment worth US$135 million, sourced from Japan Bank of International Credit (JBIC) on which the participants trained on, included six motor graders, five wheel-loaders, five excavators, five bulldozers, twenty nine different types of rollers and thirteen dump trucks. Other were cargo cranes, low bed, mobile workshop trucks, bitumen spreader and water bowser, among others.

Minister Katumba Wamala noted that the Army has been able to participate in various development activities in the country, like road construction and other key infrastructural development, because of the prevailing peace.
"Participation of the Army in building national infrastructure is good as there is no more war and the human resource has to be kept busy in other fields," he noted.
He further challenged the trainees to take up construction seriously because much of our construction works in the country is still being done by foreign contractors, something he said, should be done by Ugandans.

He implored the trainees to take up the task of maintenance of equipment adding that in Uganda, nothing  is undoable.
He applauded them for joining the right profession with great skills because it qualifies them to be employed elsewhere even after retirement.
The Chief of the Defence Forces, Gen. David Muhoozi, in a speech read by the Commander of Air Force, Maj. Gen. Charles Lwanga Lutaaya, appreciated the commitment of the  leadership of the Ministry of Works and Transport for allocating the 70 road construction machinery to UPDF for a noble cause of building capacity  for the national infrastructural development.
The Managing Director of NEC, Maj. Gen.  James Mugira said that it is a pride to the nation that the trainees, who have fully undergone road works equipment operational skills, will benefit the country and a lot of expectations is on them.

The Under Secretary Ministry of Defence, Mrs. Edith Butuuro, was happy to note that the nation is now beginning to realize the benefit of acquiring very important road works machinery after a long time which,  she said, is a critical element contributing substantially to the national economy.
The trainees were awarded certificates, a lifetime achievement that would get them employment opportunities after retirement from active military service. ENDS