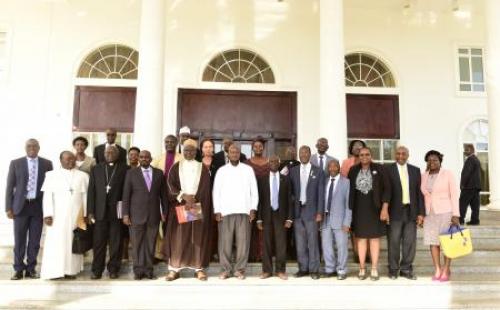 President Yoweri Museveni has today held a consultative meeting  with members of the Inter-Religious Council and the Elders Forum at State House, Entebbe.
During their deliberations, it was agreed that the launch of the     National Dialogue be postponed from 21st November 2018 to  18thDecember 2018.
The postponement was sought been to enable the on-going consultations on the detailed arrangments pertaining to the NationalDialogue with other key stakeholders.
President Museveni emphasised that the importance of the NationalDialogue was for the promotion of stability and prosperity.
He further stressed broad-based involvement and inclusion of      different key stakeholders.

The Attorney General, William Byaruhanga, clarified that his Deputy,Rukutuna Mwesigwa, had been misquoted when he was alluded    recently to have said that Government was not interested in the  National Dialogue.