President Yoweri Museveni has received and held a meeting with Sheikh Faisal bin Thani Al-Thani, Director of Regional Investment Funds at the Qatar Investment Authority, who called on him yesterday at State House Nakasero. Sheikh Faisal also conveyed warm greetings to President Museveni and the people of Uganda, from the Emir of the State of Qatar, Sheikh Tamim bin Hamad Al Thani.

Sheikh Faisal’s current visit to Uganda aims at exploring investment opportunities in the sectors of infrastructure, energy, tourism, mining and food security in Africa.
“The Qatar Investment Authority has US$1 billion to invest in Africa and we are looking for areas to partner in,” he said.
Qatar Investment Authority is a state-owned holding foreign wealth fund that specializes in domestic and foreign investment. The 13-year-old organization manages assets worth over US$300 billion.

President Museveni warmly welcomed Sheikh Faisal and his delegation to Uganda saying that as part of its strategy, the National Resistance Movement Government is to forge partnerships as well as increase investment in the country. He praised Qatar’s interest to invest in Africa and also for choosing Uganda as one of the countries to invest in. He said there are opportunities in the agro-processing business, mining, and hospitality, among others.

“We want vertical integration. We want to do processing here that is linked with our industries. For example, we want to mine copper to feed our transformer and military sectors. Minerals must be purified to the top level so that we use them for our industries and export the excess,” he stressed.
President Museveni also called on Sheikh Faisal to promote Uganda as a tourist destination to the people of Qatar. 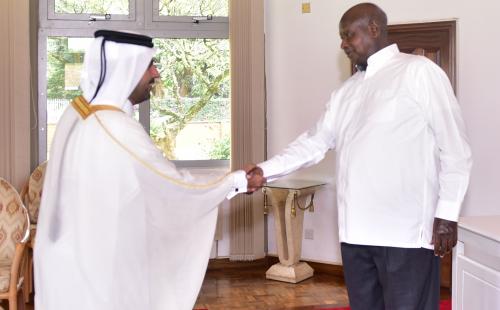 “We want more tourists from the Gulf states. Uganda is unique and has a lot to offer i.e. permanent snow right on top of the Equator, a variety of animal and bird species,” he said.
Sheikh Faisal who said he was awed by the weather in Uganda revealed that he would be interested in partnering with Uganda in the tourism sector. “The weather in Uganda is amazing,” he said.
Accompanying Sheikh Faisal on the visit to Uganda is Ali Abdulrahaman Ali-Abdulla, Business Development Director-Nebras Power; Hamad Abdulla Al-Mullah, CEO of Qatari Hospitality; Khalid Al-Obaidli, CEO Qatar Mining; Mohamed Badr Hashem Al-Sada, CEO of Hassad Food and Sultan Ali Hamad Abdulla, Director of Qatar Investment Authority Office.