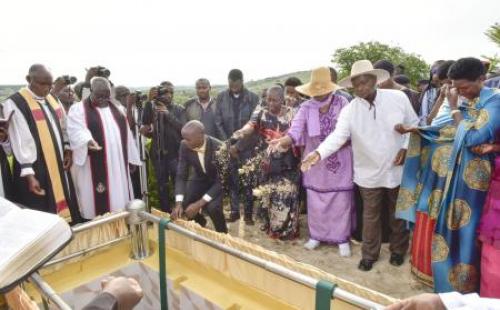 President Yoweri Museveni has challenged Ugandans and the youth in particular to appreciate the goodness in keeping their culture and heritage in the face of modernity in order to sustain the stability of their cultural traits.

“Africans have a challenge of keeping culture and combining it with modernity without picking what is relevant. People are too quick to behave like those in the western world. Although there are advantages and disadvantages, it is more important to keep in touch with culture and heritage and not trade it with behaving like Europeans or Arabs,” he said.
The President, who was accompanied by the 1st Lady, Mrs. Janet Museveni, was speaking at the burial and celebration of the life of his late paternal uncle,  Eriya Riisi, that took place this afternoon in Ruhunga Parish of Rubaya Sub-County, Kashaari County in Mbarara district. Mzee Eriya Riisi died in Kampala mid this week in Kampala at the age of 94 years.
The President commended his late uncle’s lifestyle of hard work that enabled the late Riisi to accumulate family wealth. Mr. Museveni said that people can live very well and prosper economically without necessarily being employed in government sector.

Mr. Museveni said that from 'the kraal to school' and gaining exposure about other areas of the world, he (President) became a change agent in his community of Ankole Sub-Region by teaching traditional cattle keepers to shift to modern concepts of farming.

He, therefore, urged the youth to endeavour and apply modern education to sensitize their parents and communities to learn modern concepts of farming.
“What I emphasize is that going to school and fail to change your families’ economic lifestyles, would tantamount to a big failure,” he said.
The President used the occasion to call upon the people of Uganda to work hard and shun extravagance in order to build their wealth. He also warned against land fragmentation adding that families should consolidate their pieces of land and only share out the dividends that accrue from production activities from their pieces of land that should never be parceled out in uneconomic units.

Parliamentary Speaker, Rt. Hon. Rebecca Kadaga, urged the people to emulate the late Mzee Riisi for his wisdom to accumulate family wealth with minimum level education.
The late Mzee Eriya Riisi’s family members commended him for being a well respected parent and elder in society, championing good morals, virtues, education and values as well as instilling a spirit of selflessness among his children.

They thanked the President for supporting the family during the period that Mzee Eriya Riisi had been sick.
North West Ankole Diocesan Bishop, Rt. Rev. Enoth Magezi, who led the prayers, emphasized the importance of everyone’s struggle to cultivate a relationship with God all the time. ENDS